In works by Jane Fox Hipple from 2009-2011, viewers were drawn inward by distinct holes or nails run-through the rectilinear surfaces. These distinct marks and blemishes punctuated surfaces of works that Hipple had already made look distressed with translucent washes of paint. Later, the rectangular frameworks of Hipple’s paintings became a distinct subject that extended the visual perceptions of the work horizontally, and projected a linear narrative quality (this chronological aspect was particularly apparent in the exhibition The Way of Things from 2012) onto the series—one that redirected the visual focus from inward to outside of the picture lane. As Hipple prepares for her third solo exhibition in September 2013 at DODGEgallery in New York, artcore journal reflects on the narrative transitions in her work—from pointed and linear arrangements to one that more closely aligns with notions of reverberation or a projection of the work outward into space. 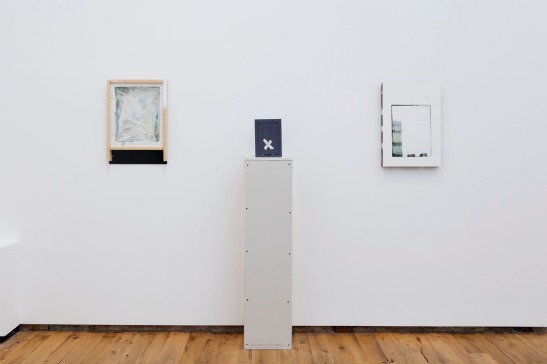 From 2011–12, and in particular in the exhibition The Way of Things (June 28–Aug. 10, 2012) Hipple’s works collectively read as a narrative. The abstract paintings, works on paper, and sculptures were made from assembled scrap wood materials and splashed with light drippy washes of subdued color, affixed with tapes, and run-through with nails and screws, as seen in earlier works. However, rather than functioning independently, Hipple’s works seemed to have a designated sequence similar to the style of the development of chapters in works and site-specific installations by R. H. Quaytman. Certain passages in the gallery suggest this—in an installation view Stander (close-up) (2011), a small all-black rectangular framed-in-black painting, except one white tattered X marking a spot with tape, was placed atop a white wood laminate pedestal with exposed screws. In the exhibition it was situated directly between Act 4 (2011) and Banded (2012), both small rectangular compositions of various painted and assembled materials set within a rectangular format. Hipple’s repeated use of the rectangular form and eloquently untouched areas of negative space serve to link the individual works and form an abstracted linear narrative. 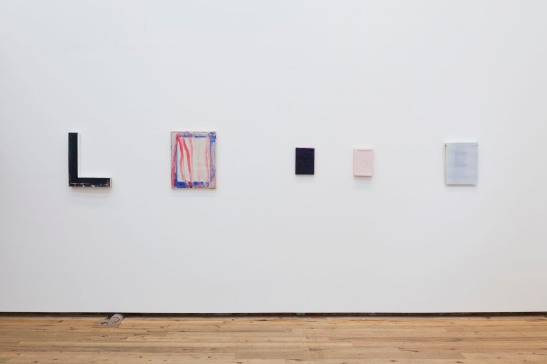 In the series of works on the adjacent wall leading up to the preceding trio there were similar instances of a narrative flow. Here, it was emphasized more prominently in the way the in which the works were spaced equidistant from one another along the short wall. The small black “L” shaped Sweep (2012) bracketed four rectangular panels that vary on the theme of the rectangular form. The bracketing, in a way, set this section apart or perhaps interjected new information, similar to how bracket punctuations would be used in a narrative. The titles, Patsy (2012), Pink Thing (2011), and Supporting Role (2012) even provided possible correlations to characters’ names that suggested these works together support a story-line. Despite the theory of a narrative playing out in works from The Way of Things exhibition (the title even sounds like a family comedy from the 80s) the abstract nature of the forms continue to leave this notion wondrously vague and indeterminate.

It is less the case with Hipple’s most recent works, although, it remains be seen how they will be arranged/presented in the gallery. There are indications, by Hipple’s introduction of new materials and forms, of a possible break in narrative sequencing. Each object reads likes a public showing of select private journal entries—the subject, its author—where the layers of exposed materials and marks provide access to the space and time of Hipple’s own intent. She leads the discussion but this time there is an exchange between the viewer and the work— rather than the works being only ancillary to a suggested narrative chronology. Hipple creates this new viewing atmosphere of exchange by deepening and expanding her use of materials—cotton sheets stained with paint, burst from behind wall hung paintings and billow onto the floor while some cloth sheets are pulled through spaces in the frame, like mold blooming from the surface. Collectively, these new assemblages work to interact even further into the viewers’ space.

This activation of space beyond the wall is a visible manifestation of Hipple’s work taking on a reverberative quality. For something to reverberate it remains continuous like a looping echo that goes on, and on, and on; it doesn’t stop; it keeps going, without end. Where Hipple’s other series’ tended to have a sense of order—and in their showing in a gallery space resonated with there being a potential end-point in their abstract linear narrative sequences—the new works (they have not yet been shown in an exhibition) already show signs of expanding beyond a linear construct.

Immediately, we notice the ongoing, repeated use of a rectangular motif resurface in her most recent paintings. Naomi Spector, in her intimate book Eva Hesse: Visible and Invisible Inventions, which explores the inventive aspects of Hesse’s work from the 1960s, alludes to a similar repeated use of this geometric form stating, “Hesse’s rectangular inventions that cover an amazing range of manifestations: planar, boxy, gridded, folded, attached to each other, spaced in a row, placed along diagonal lines, and appearing in both massive and very fine dimensions.” Hipple’s works do as well, and immediately engage with a dialog of form and its intent.[i]

Epilogue A (2102), a large light blue rectangle sits atop an even larger rectangular surface (three quarters of it painted in a translucent white and one quarter a chalk board-like grey) and a paint-stained white sheet drops down below the painted surface, its flounces tucked and gathered making it look as though somewhere behind the work the yards are elegantly bustled. It is much larger and commanding than many of Hipple’s previous paintings, which are more intimate and perhaps more amenable to being included in the flow of a visual narrative within the gallery. Epilogue A has the power of punctuation; it stands slightly taller than the height of most average viewers and it seems to sweep both inward and out into the space. It engages physically with the viewer’s space rather than being placed at a distance and/or read in conjunction with other works. Like an epilogue, Epilogue A draws the discussion beyond the repeated rectangular motif. Its layered and gathered materials evoke a deeper discourse—one that reaches into the expanded fields of painting and sculpture. Like Rosalind Krauss’ move to explore sculpture “on the periphery of a field in which there are other, differently structured possibilities,” so to are we pulled away from a strict linear narrative read of Hipple’s works and are given clearance to stand back—viewing from multiple point and perspectives—and engage in the expanded field.[ii]

Like Hesse, Hipple’s persistent depiction of a rectangular motif resounds with the notion reverberation—on, and on, and on. This reverberative quality also has strong affiliations with the notion of verbal linking—the transition of Hipple’s titles for her works, from character correlations to prepositions and obliquely referential statements, has opened them further to viewer accessibility. A shift from a reading of the work to a dialog with the work has occurred. Spector noticed a very interesting and important link between Hesse’s work and verbal linking that help expand on this idea, she wrote “[i]n 1966, [Hesse] she began to title her work in a new way that distinctly heralds an obsession with number[s], with accumulations, multiples.”[iii] This additive process reflected Hesse’s first language, German, where words are strung together. Spector wrote, “she would say, ‘[i]t is very surreal, very strange. It is weird,”[iv] creating an accumulation of reverberating phrases. In the repeated rectangular motif and the transitions of Hipple’s use of language for her titles “gradually we observers come to a point where we see against (what a word: ‘again’ plus the suffix indicating the most extreme or the last in a sequence) the chaos and emptiness to grasp, simply, the present, this new-enlightened moment.”[v]

[v] Ibid., 25. The anti-climactic was a literary tool, and here referred to as one, often used by Samuel Beckett, whom Nancy Spector notes as an influence of Eva Hesse’s.

This entry was posted on July 22, 2013 by artcore journal in Volume 2, Issue 1: Women and tagged DODGEGallery, Jane Fox Hipple.